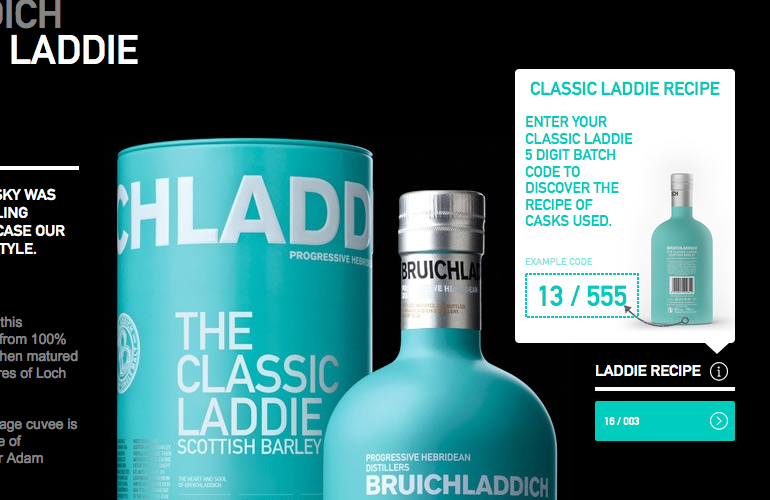 As first reported at scotchwhisky.com; Bruichladdich has honoured its promise to release information about the casks that make up the recipe to its NAS whisky, The Classic Laddie, on its website.

END_OF_DOCUMENT_TOKEN_TO_BE_REPLACED

In some ways you’d think this might be a bit of a contentious topic for a first post on my blog, but given the reactions to Compass Box’s Transparency campaign online – the fact that one of the ‘big boys’ of Scotch, Bruichladdich (which is owned by Pernod Ricard), is openly supporting the campaign – and the fact that even the SWA (Scotch Whisky Association) is now planning to hold talks on the issue due to the sheer number of people that have signed the petition; the topic probably isn’t really all that contentious at all except for the fact that for there to be any movement on the matter will require legislative approval from 28 nations that comprise the EU.

Some people (possibly cynics – but that usually includes me) believe that this campaign is a publicity stunt by Compass Box, and possibly Bruichladdich as well. I personally doubt that publicity was the primary purpose of the transparency campaign – although I don’t doubt that the increased attention that the campaign has generated is welcomed by those involved.

For those that aren’t aware of the transparency campaign, it is about one thing, and one thing only – the fact that it is currently illegal for aged spirits (such as whisky – either blends or single malts) to display the age of the component casks that make up the bottling.  The age of the components are not allowed to be displayed either on the bottle, nor on any marketing or sales material.  At present, whisky is allowed to either display no information, or only the age of the youngest component cask. Compass Box wants an amendment to the aged spirits laws of the UK and EU that would allow all of the details of each component cask, including the age, to be displayed – but still only allow the youngest component’s age to be displayed as a headline of the label (if any age is displayed).