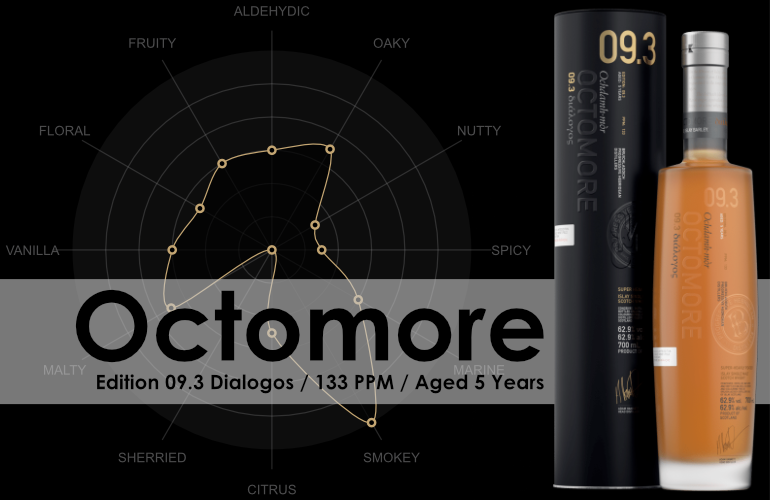 Mouthfeel: Thick and chewy – it coats your mouth and just stays there.

Finish: Long, dry, and smokey. The more medicinal notes return, along with a lingering saltiness.

The Octomore of Octomore. The Octomore series 9 Islay Barley release. Made from barley from one field in the Octomore farm. This is Bruichladdich taking terroir in whisky to the extreme.

Like the rest of series 9, Octomore 9.3 is made from Concerto barley harvested in 2011, although unlike the rest of the series, 9.3 is grown on Islay rather than the Scottish mainland. With this release, Bruichladdich not only gives us the farm on which the barley was grown, but also the exact field on the farm – Irene’s Field on Octomore Farm.

Peated to 133ppm, and bottled at a whopping cask strength of 62.9% with no chill-filtration and no colouring. 18,000 bottles were released worldwide.

In some ways I like this whisky a lot – in that it really lets the local barley shine through. On the other hand, as a whisky it seems to be lacking depth.

Often, heavily peated whiskies seem to fight their casks; but Octomore has always been a little different – and after having this whisky with it’s refill casks; as well as the 07.4 and 08.4 with their virgin oak casks and refill casks, I feel that Octomore excels in rich and wonderful wine casks that most peated whiskies would be destroyed by.

This is probably my least favourite x.3 release so far. Normally the x.3 bottlings are some of my most loved – the 07.3 on the other hand is still one of my favourite whiskies produced by anyone.

Nose: Loads of fresh malted barley, milk arrowroot biscuits, along with apple & honey porridge come first up. Then comes the peat - strangely medicinal for an Octomore. There's also hints of wood shavings, and a faint eucalyptus note. Palate: Raw malty spirit, smokey tea, lemon sponge cake, and soggy hay. Loads of smoke - perhaps a little more ashy and tarry than is normal for Octomore. Mouthfeel: Thick and chewy - it coats your mouth and just stays there. Finish: Long, dry, and smokey. The more medicinal notes return, along with a lingering saltiness. The Octomore of Octomore. The…
Bruichladdich: Octomore 9.3
Bruichladdich: Octomore 9.3
The Whisky Ninja

Maybe - not sure I'd pay for another bottle though.