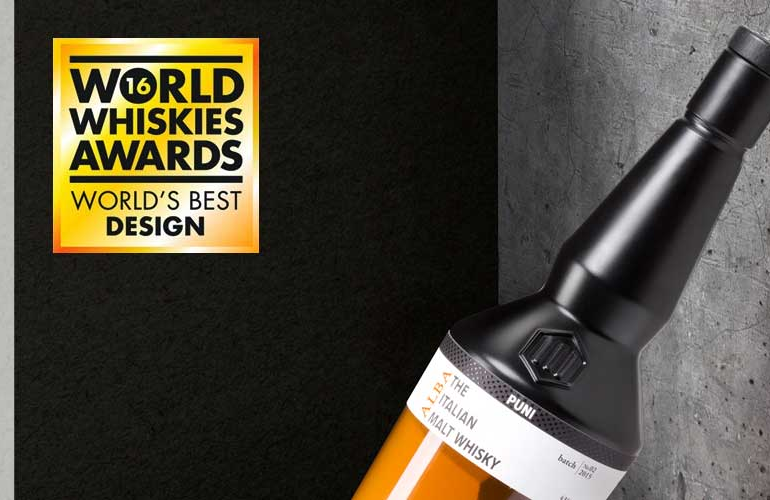 Palate:  Earthy, herby, a little spicy – also a little sweet.  There are some berry and plum notes.  Some faint cereal notes – a mixture of Weet-Bix and All-Bran.  Traces of the peat casks that some of the whisky was slumbering in hang around.

Mouthfeel:  A decently medium weight in the mouth with a soft and silky feel.  A slight alcohol burn.

Finish:  This whisky has a fairly long finish.  Spicy, full of peat, and the earthy notes from the palate continue right through.

This whisky is a non-age statement un-peated Italian blended whisky that was aged in a combination of ex-Islay peated Scotch whisky casks, and Marsala wine casks.  It was bottled at 43% ABV with no added colouring, and no chill-filtration.

This is an interesting whisky; a blend of malted barley, malted rye, and malted wheat that was aged for three years in Sicilian ex-marsala casks before being finished in ex-Islay peated Scotch casks.  The spice from the rye is quite prominent throughout, as is the peat notes from the peated ex-Islay Scotch casks that it was finished in.  There is also a sweet fruitiness that lasts most of the journey as well, undoubtedly from the three years it spent in the Sicilian wine casks.

Although I first tasted this whisky at Whisky Live, it is hard to truly appreciate a whisky when you’re drinking that many of them so close together.  Never the less, it captured my attention, and after acquiring a bottle of it, I presented it in a couple of European whisky tastings that I held – where it was generally warmly received.  Although it was against some other intriguing competition from Goldly’s (Belgium), Slyrs (Germany), Millstone (Netherlands), Floki (Iceland), Mackmyra (Sweeden), and Santis (Switzerland); there were a few people that rated it as their favourite, and most people thought it was reasonable or better.  After the tastings, I sat down with what was left and gave it some due consideration on its own.

If you haven’t seen a picture of the Puni distillery, prepare to be amazed – the distillery building is more what you’d expect from a modern-art gallery than a whisky distillery.  Absent are the pagodas and chimneys, present is an almost mesh-like cube situated in the idyllic countryside of the northern Italian Alps.  The distillery gets its name from the nearby Puni river.  The surrounding region has been growing rye since the times of the Roman Empire, and it is this rye that Puni has malted and used in this whisky.  The amazing cube distillery building houses not just the distillery, but also warehousing where some of the Puni whisky slumbers, whilst the distillery also uses abandoned WWII-era underground bunkers to age the rest.

Whilst I could not say that this whisky has been one of my favourites, I am by no means going to struggle to finish my bottle of it – it’s both a pleasant whisky, whilst also being full of character.  The world would definitely be a better place if more whiskies had both of these attributes.

Nose:  Spicy, dried fruits, mixed herbs, dates, and smoked almonds. Palate:  Earthy, herby, a little spicy - also a little sweet.  There are some berry and plum notes.  Some faint cereal notes - a mixture of Weet-Bix and All-Bran.  Traces of the peat casks that some of the whisky was slumbering in hang around. Mouthfeel:  A decently medium weight in the mouth with a soft and silky feel.  A slight alcohol burn. Finish:  This whisky has a fairly long finish.  Spicy, full of peat, and the earthy notes from the palate continue right through. [divider] This whisky is a non-age…
Puni Alba (2016 Batch 1)
Puni Alba (2016 Batch 1)
The Whisky Ninja

Probably; I may even buy another bottle - although it's worth noting considerable differences between batches. 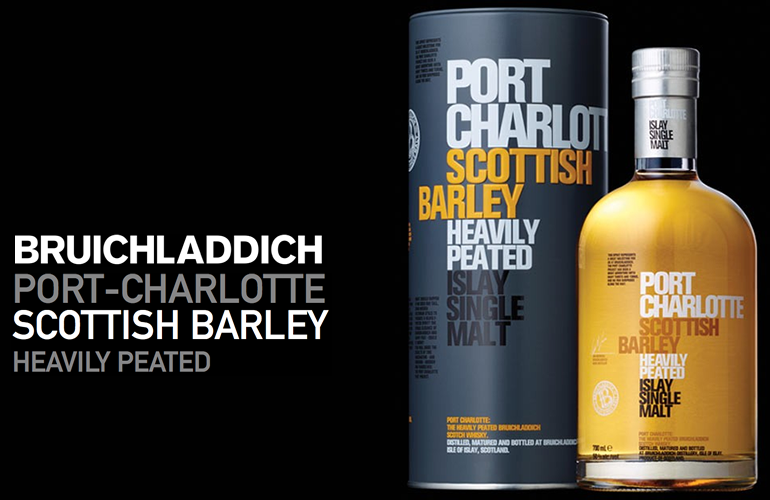 END_OF_DOCUMENT_TOKEN_TO_BE_REPLACED

Nose: Smoky, sweet, salty - quite coastal.  Hints of citrus - mainly lemon; and traces of nature reserves (from where I grew up).  Quite soft and subtle for the peat level. Palate: Smoky and salty, vanilla and lemon - a slightly floral hint lurking too.  The smoke is clean and bushfire-like rather than the usual Islay medicinal peat.  the smoke levels are consistent with what you'd expect from the peat levels of this whisky, but the rest of the palate is remarkably mild and smooth.  Somehow the palate is both delicate and solidly heavy at the same time. Mouthfeel: Thick,…
Bruichladdich: Port Charlotte Scottish Barley
Bruichladdich: Port Charlotte Scottish Barley
The Whisky Ninja 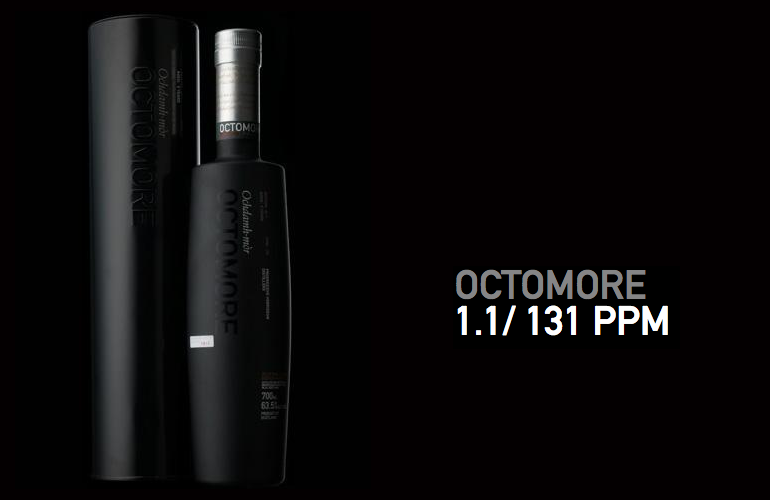 END_OF_DOCUMENT_TOKEN_TO_BE_REPLACED

Nose:  Salt, seaweed, hay, wood shavings, and fresh malt.  Also some aniseed, and wet tar. Small hints of icing sugar and sherbet are also there. Palate:  Brine, peat, straw, jalepenos, mixed beer nuts, and well-charred barbequed meats.  Did I mention the brine and the peat?  They make up the majority of the flavour. Mouthfeel:  Mid-weight, and quite oily.  Quite a bit of burn. Finish:  Salty, extremely peaty, and barbeque ash.  Quite a long finish, with a decent amount of burn.  The finish is surprisingly dry considering the mouthfeel is so oily. Balance:  It's not really balanced at all; sweet and…
Bruichladdich: Octomore 1.1
Bruichladdich: Octomore 1.1
The Whisky Ninja 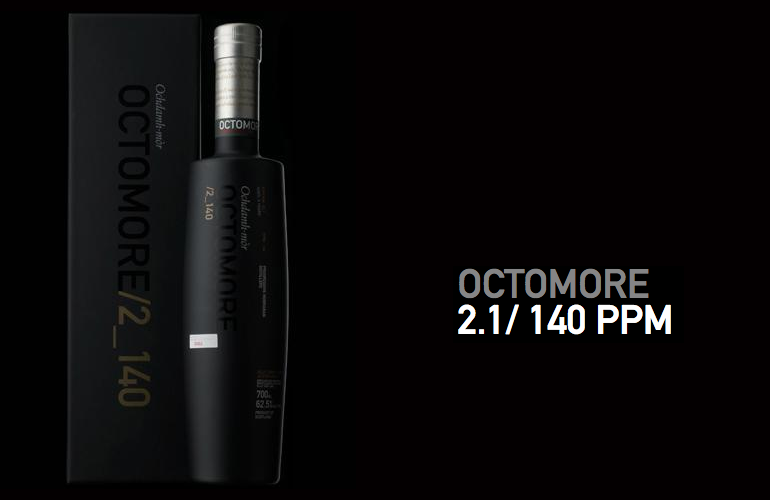 END_OF_DOCUMENT_TOKEN_TO_BE_REPLACED

Nose:  Brine, lemon, recently mowed grass, peat, and polished wood.  Also traces of freshly oiled leather, and a slight hint of green apples.  Quite fresh and light. Palate:  Sweet malt, grass, burnt barbeque marinade, mixed citrus lollies, and fresh mint & other herbs.  There's a thick layer of strong and sweet peat blanketing everything.  Quite creamy. Mouthfeel:  Slightly less thick than the 1.1, but still what I'd say is mid-weight.  Slightly dry and creamy.  A small amount of burn, but quite a bit less than the 1.1. Finish:  Reasonable length, but shorter than most Octomores.  Quite sweet.  Fresh grass, lemon…
Bruichladdich: Octomore 2.1
Bruichladdich: Octomore 2.1
The Whisky Ninja 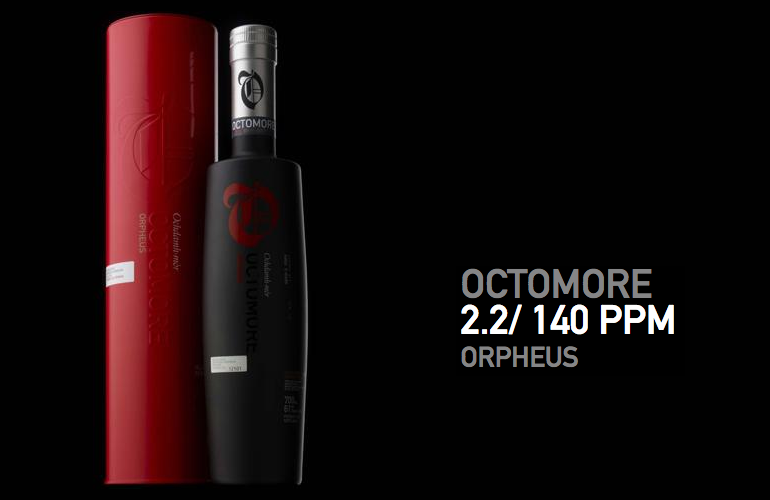 END_OF_DOCUMENT_TOKEN_TO_BE_REPLACED

Nose:  Wet timber, moss, ripe grapes, and mixed red-berry jam.  Also, unusually for an Octomore, there is quite a prominent amount of newmake spirit and paint-stripper on the nose.  Also a hint of some portwine jelly.  Given a bit of a breather, the paint-stripper and newmake spirit dies right off, with the berries and jelly becoming far more prominent. Palate:  Very sweet, with a hint of peat.  The grapes and mixed red-berry jam from the nose are quite bold on the palate.  Thankfully the paint stripper has departed, although there is still a hint of some newmake spirit at the…
Bruichladdich: Octomore 2.2
Bruichladdich: Octomore 2.2
The Whisky Ninja 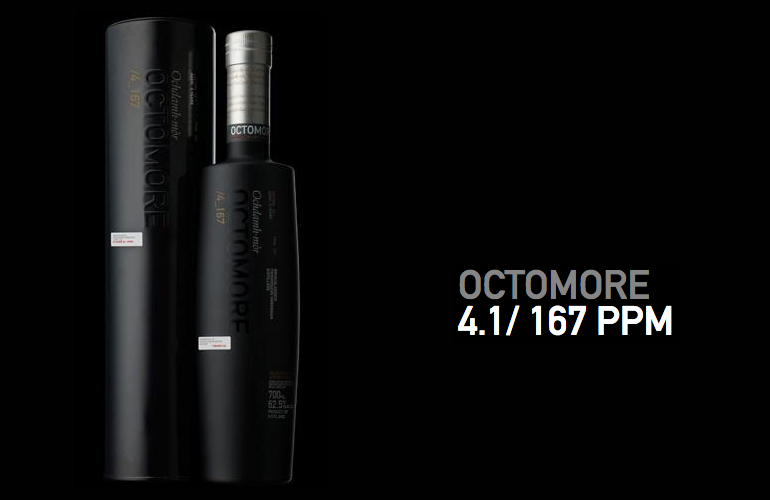 END_OF_DOCUMENT_TOKEN_TO_BE_REPLACED

Nose: Peaty, and salty.  Damp earth, and very slightly floral.  Not as peaty as you'd expect.  Quite clean, and not overly complicated on the nose. Palate: Straight up front you are absolutely belted with peat and cereal notes.  Sledgehammer to the tastebuds time.  After the sledgehammer is put away you get notes of ocean spray, bushfire smoke, and fresh tar.  Faint notes of vanilla and dried apple, but also a decent dose of pepper.  There's the tiniest trace of the dust that is left at the bottom of a bowl of beer nuts.  The peat lingers across the entire palate,…
Bruichladdich: Octomore 4.1
Bruichladdich: Octomore 4.1
The Whisky Ninja 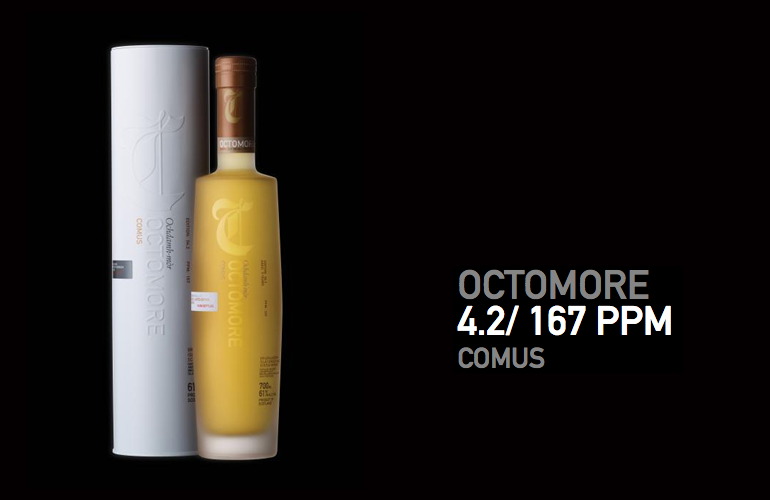 END_OF_DOCUMENT_TOKEN_TO_BE_REPLACED

Nose:  Honey snaps (biscuits), malt, vegetal peat, wet leather, and something strangely like jalapenos and over-ripe green grapes.  Sweet yet also tangy at the same time.  Also some floral notes hovering around the back, and a faint traces of vanilla pods and fresh cut grass. Palate:  Creamed honey, vanilla, and a strange mixture of something florally and briny vegetal-peat notes.  Super sweet, yet also quite peppery. There's also some pear cider and lemon zest floating around, and some candied ginger - and just a touch of Kakadu plum. Mouthfeel:  Mid-heavy weight, and very slightly both oily and syrupy.  A bit…
Bruichladdich: Octomore 4.2
Bruichladdich: Octomore 4.2
The Whisky Ninja 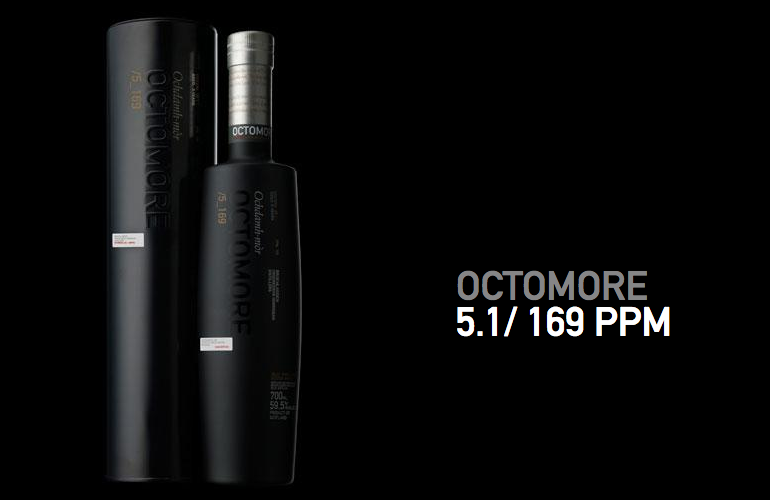 END_OF_DOCUMENT_TOKEN_TO_BE_REPLACED

Nose:  Salty sea water, peat, fresh hay, lemon peel.  Very clean and compact. Palate:  Lots of salt and peat.  Slight seaweed and grassy notes; along with some boiled lemon lollies.  The faintest notes of cinnamon sponge cake.  The palate is almost entirely the same as the nose, with the added cinnamon sponge edging in right at the back. Mouthfeel:  Thick, so very thick.  Oily to start with, yet it dries extremely quickly as it heads to the back of the tongue.  Absolutely no alcohol burn at all. Finish:  Long, warming, and very dry.  Peaty, salty, and very lightly grassy. Balance: Perfect. …
Bruichladdich: Octomore 5.1
Bruichladdich: Octomore 5.1
The Whisky Ninja 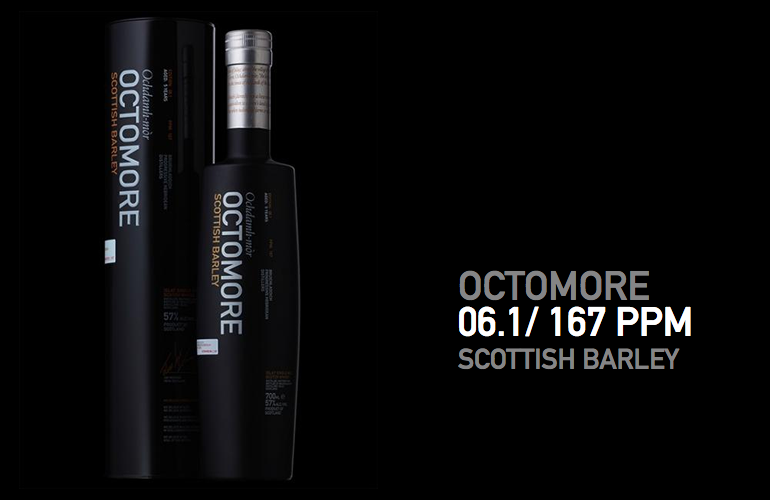 END_OF_DOCUMENT_TOKEN_TO_BE_REPLACED

Nose:  Seaweed, peat, salt, and leather. A slight hint of dried fruits and nuts.  Both the seaweed and peat really dominate, but overall the nose is quite subdued compared to other Octomore editions. Palate:  Massively peaty and vegetal, with quite a bit of iodine as well - not Laphroaig levels of iodine, but probably the highest levels for an Octomore.  Strangely a little bitter at the back of the tongue. Mouthfeel:  Midweight and oily.  A slight alcohol burn. Finish:  Decent length, although a little subdued.  Quite a bit of iodine and vegetal notes, along with the ever-present peat.  A touch…
Bruichladdich: Octomore 6.1
Bruichladdich: Octomore 6.1
The Whisky Ninja 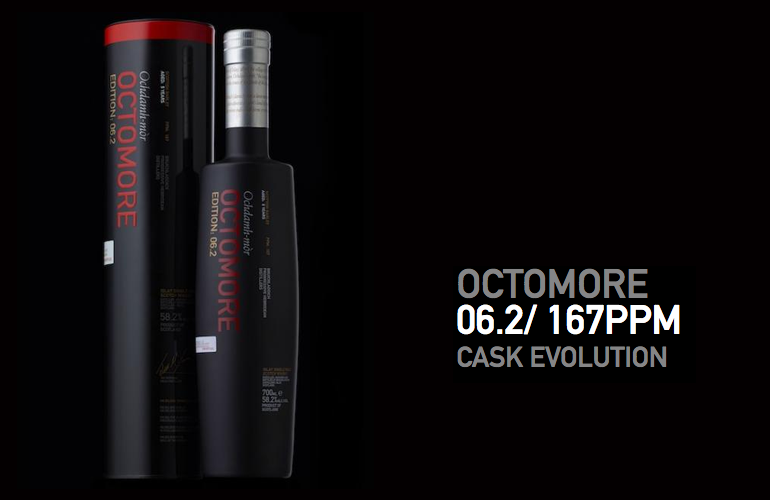 END_OF_DOCUMENT_TOKEN_TO_BE_REPLACED

Nose:  Salty peat (dry earthy peat, not at all medicinal), a bit of that flower-bed smell with mulch and bark, fresh charred wood, and sweet citrus notes.  There's also some berry ice cream, and some peppery notes.  Given some time to breath, more fruity notes show themselves, with the earthy notes receding in their wake. Palate:  The salty peat is prominent.  Citrus flavours and sweet berries are fairly big too.  Quite sweet with lots of vanilla, as well as an earthy taste, along with some charred wood and white pepper as well. Mouthfeel: Reasonably thick, although not notably so for…
Bruichladdich: Octomore 6.2
Bruichladdich: Octomore 6.2
The Whisky Ninja