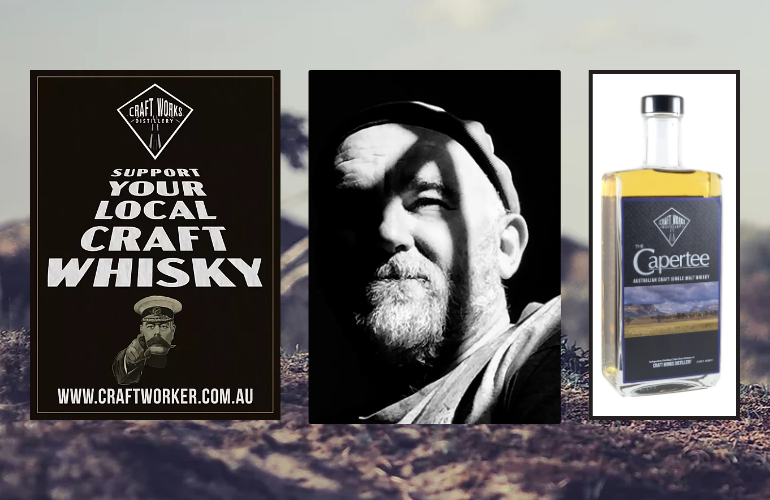 Nose: Quite green. Lots of fresh malt and barley. Milk Arrowroot biscuits, a touch of honeydew melon, and just a hint of lemon icing.

Palate: To be honest, I’m having a little trouble nailing down the palate on this one. There’s no doubt this is still a very young whisky, but once you get past the green notes of malted barley; there’s quite a lot going on here. The melon from the nose is still here. Along with the lemon icing, grapes, and a touch of mandarin. It is also a little bit herbal – and with a bit of a hint of brandy.

Mouthfeel: Wow! This is thick and heavy. Super oily, and not a hint of alcohol burn.

Finish: At first it seems as though the finish is going to be short and sharp, with lots of barley and sweetness hanging around your throat – which considering how thick the whisky is, is probably the whisky still making it’s way down. After a while though, you realise that it is still hanging around – a lot softer than at the start, but a warm glowing feeling with hints of malted barley and a general sweetness. It lasts forever!

In the spirit of complete transparency – although I have bought, and loved, whisky from Craft Works in the past; this whisky was provided as a sample by Craft Works.

This whisky is an independent Australian single malt bottling from Craft Works, distilled at an un-named (as requested by the distillery) southern NSW distillery. Bottled with no chill-filtration, and bottled at 47.5% with no added colouring.

This bottling is a cellar door only release – or it was until the Covid-19 coronavirus shut everything down, at which point it was released for sale through a selection of independent bottle shops, as well as the Craft Works distillery website.

Craft Works is a one-and-a-half man band distillery and independent bottler that is located behind the Royal Hotel in Capertee in New South Wales (Australia) – with Craig “Crafty” Fields being the owner, distiller, brewer, blender, and everything-else operator, along with his apprentice and side-kick; Todd.

It has not been a good year or two for the Lithgow region where Capertee is – with a massive drought having wrecked havoc with most of the state for years being followed up by the most devastating bushfires in Australia’s history; and before we even get them all extinguished, the Covid-19 pandemic erupted. Calamities abound has not stopped Craft Works though – with Crafty brewing and distilling at all hours throughout the summer; except when his shed got too hot to work in – or when the Rural Fire Service evacuated the area.

Crafty, and his well-worn French cap, have been a massive presence throughout Sydney’s whisky scene for a number of years now – and if you’ve attended more than a handful of whisky tastings and events in Sydney over the years, you’ve probably met the man. Several years ago, Crafty started buying whole casks of whisky from a variety of Australian whisky producers, with an eye on becoming an independent bottler; of which this whisky is a result. Eventually he took the plunge and established his own distillery as well – the results of which we will have the pleasure of sampling in a couple of years.

This whisky has no age statement on the bottle (or listed on the Craft Works website), but it is still quite a young whisky in my opinion – with lots of malt and barley still present on both the nose and the palate.

The mouthfeel and finish on the other hand are just phenomenal!

Twirl this whisky around in your glass, and you’ll probably still be here next year waiting for the legs to drop. It just grips the inside of your mouth, and once you finally manage to swallow it; the finish just goes on for an eternity.

The Capertee was aged in an un-charred ex-Chardonnay cask, a heavily charred ex-Bourbon cask, and a small ex-Botrytis wine cask. It has worked out to be quite a good combination in my view.

This is not your average single malt whisky. It’s a bit young, and a little bit funky; but sweet heavens – if you come across a bottle, grab yourself a glass (or possibly buy it first if it’s in a shop!) and indulge in an amazing experience!

Nose: Quite green. Lots of fresh malt and barley. Milk Arrowroot biscuits, a touch of honeydew melon, and just a hint of lemon icing. Palate: To be honest, I'm having a little trouble nailing down the palate on this one. There's no doubt this is still a very young whisky, but once you get past the green notes of malted barley; there's quite a lot going on here. The melon from the nose is still here. Along with the lemon icing, grapes, and a touch of mandarin. It is also a little bit herbal - and with a bit of…
Craft Works: The Capertee Cellar Door Release #2
Craft Works: The Capertee Cellar Door Release #2
The Whisky Ninja

Absolutely. Although not a whisky you're likely to reach for every night, this is hopefully an example of some amazing things to come from a young distillery.