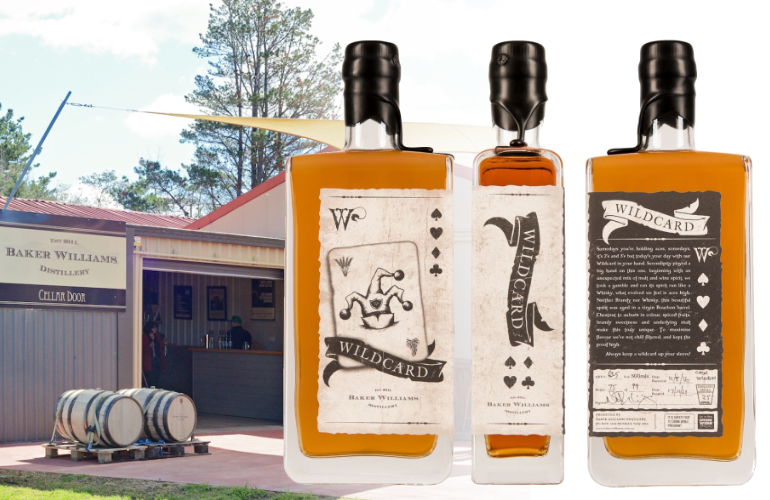 Palate: Lots of custard and brown sugar, fresh malt coming in too. The grapes, melon, and apricot from the nose a little more prominent now. There’s also a hint of nutmeg, and maybe some cinnamon and cloves as well.

Mouthfeel: Mid-weight, and quite creamy. Just the slightest tingle – pretty much non-existent for its 50% ABV.

Finish: Long, sweet, and creamy. The fruit is gone, and the spices are coming more to the fore; but still more sweet.

Unusually for a review here, this is not whisky.  It’s also not a “young malt” waiting to become whisky.  It never will be whisky. Baker Williams’ Wildcard is a blend of their Lachlan malt whisky (malted barley, wheat, and rye), and brandy spirit (Sem, Shiraz, Cab).  Married and aged together in a fresh ex-Bourbon barrel for 18 months.

Wildcard has been bottled with no chill-filtration, and no added colouring, and was released both at cask strength, and at the 50% that this bottle was.  The entire spirit, both the whisky and the brandy spirit, was aged in a single cask.

Wildcard was born from a mistake – namely the container the distillate was being emptied into wasn’t checked to make sure it was empty; but it is a damn tasty mistake!  I certainly hope that Baker Williams accidentally make the same mistake again in the future.

Baker Williams is a very (very!) small distillery located on the outskirts of Mudgee in New South Wales.  It started operations in 2012, and makes a range of liqueurs and gins, as well as whisky (this is a whisky blog, so don’t tell anyone I said so, but their orancello and lemon myrtle liqueur are superb – especially poured over some ice cream!). The distillery is owned and run by the husband and wife duo of Helen Baker and Nathan Williams.

There weren’t many bottles of Wildcard produced – so if you can get your hands on one out in the wild, either the cask strength or the 50% release (which unusually, I actually prefer just a touch more than the cask strength), do yourself a favour and grab it – you won’t regret it!