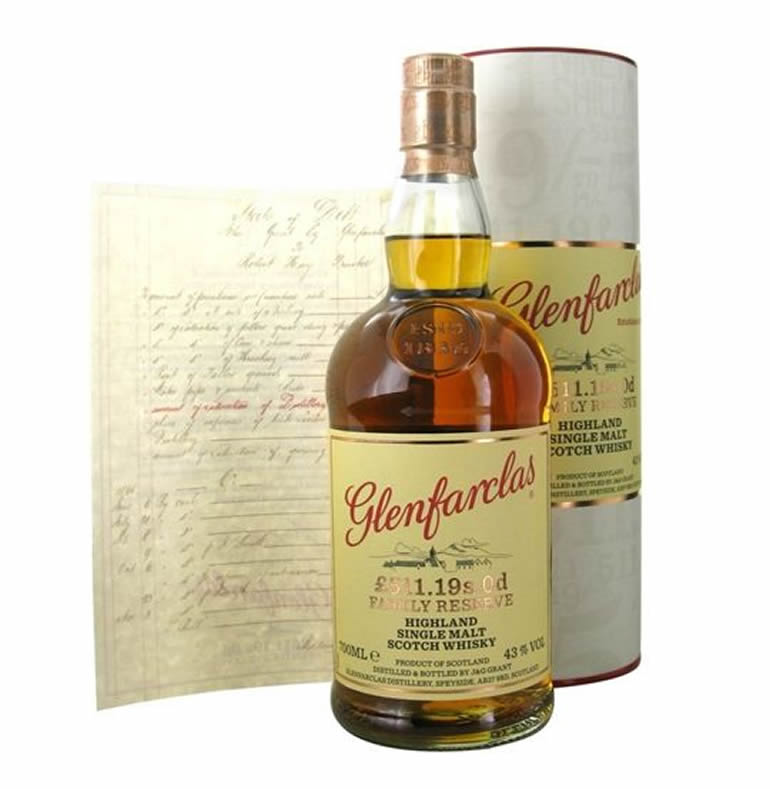 Palate: Raisins, golden syrup, marmalade on burnt toast, Christmas cake, oak spices, slivered almonds, and traces of cinnamon and nutmeg.  Quite earthy, and surprisingly little sweetness compared to the nose.  More alcohol is present than I expected from 43% ABV.

Mouthfeel: Fairly thin rolling over the tongue, slight burn on the tip of the tongue – disappearing as it heads down the throat.  Very dry, and no oils at all.

With a dash of water:  Wow – adding just a dash of water really brings out the golden syrup even more than before.  It also completely removes the alcohol from the palate, and massively enhances the golden syrup, spices, and almonds.  The burn on the tongue also disappears.  A drop of water really settles the whisky, and brings out a really smooth balance that wasn’t present with the earlier tasting.

To start off with I was really disappointed by this whisky.  I’ll admit that Glenfarclas is not my normal dram, but is one that I am perfectly happy to drink when stocked by friends or in a bar. I was however expecting something special for the release celebrating the 150th anniversary of the Grant family purchasing the distillery (purchased, in case the title didn’t give it away, for £511.19s.0d – approximately £57,000/AU$106,000 in today’s money).

Adding just the smallest dash of water though really did turn this whisky into a dram that matched my high expectations – still not one of my favourite whiskies of all time; but one that I’ll have no trouble polishing off the rest of the bottle.

Glenfarclas £511.19s.0d Family Reserve was released to celebrate the 150th anniversary of family ownership of the Glenfarclas distillery. On the 8th June 1865, John Grant bought the Glenfarclas distillery for £511.19s0d. His grandsons, John and George, later formed the company J. & G. Grant; and to this day, six generations later,  it remains a family run business – one of a very small list of old Scottish distilleries that are still family owned.  The purchase of the distillery was actually only part of a larger purchase – John Grant bought Rechlerich farm upon which the distillery is situated.  Originally the Grants leased out the distillery to a distant cousin to operate, but he later left to found Cragganmore; and John and his son George took control of the distillery which has been run by their descendants ever since.  Interestingly, the current generation running the distiller are John Grant, and his son George.

The fact that 150 years later, Glenfarclas is both still in operation, and still family owned and run is quite impressive. Having any family business survive 150 years whilst remaining a privately owned family business is impressive – a business in an industry such as whisky distilling, that has booms and busts that regularly decimates large swaths of older companies, surviving this long id really quite an accomplishment.  The family has seen several large transformations of their industry, and have passed on numerous offers of mergers and acquisition from other distilleries – choosing instead to march ahead on their own.

The Glenfarclas £511.19s.0d Family Reserve is a vatting of predominantly first fill sherry butts, bottled at 43% vol, has been non-chill filtered, and is one of 12,000 bottles. Each bottle includes a copy of the original bill of sale. Simultaneously with the release of the £511.19s.0d Family Reserve, the Grant family filled and stored 10 sherry butts, and 10 sherry hogsheads for use in the future. The family are still planning for the long-term, laying down stock now to provide aged whisky for the years ahead.

The Glenfarclas £511.19s.0d Family Reserve is not one of Glenfarclas’ biggest sherry monsters, and is in fact quite smooth and mellow flavour-wise compared to other releases in the family.  Although Glenfarclas has decided not to disclose any details of the casks that went into the vatting, and has also not provided any age statement at all, I’d say that there is a mixture of ages of casks in the vatting – including a few older casks.