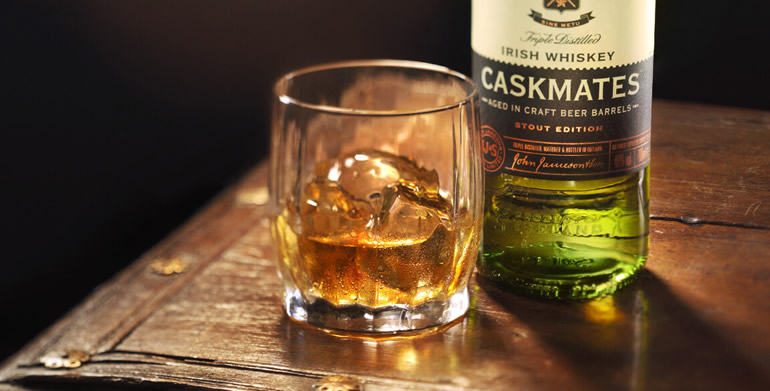 Mouthfeel:  Thick, dry, and oily in equal measures that complement each other rather than fight each other.  A slight burn down the sides and back of the tongue, although such a small amount that it fades before it hits the throat.

Finish:  Long and dry, peppery with a touch of dark cooking chocolate.  Warming embers lasting long on the tip of the tongue.

On The Rocks: Pouring over some ice subtly muffles the spices and hickory salt, but not completely; obscures the malt flavours whilst really bringing out the fresh winter fruits – mainly apples and pears. The Tim Tams become more like the dark cooking chocolate that’s in the finish – taming the sweetness that the winter fruits would otherwise display.  The mouthfeel also changes, thinning out a bit whilst also losing the dryness and much of the oily texture.  Adding ice doesn’t really affect the finish in any material way.

Aging whiskey in casks from liquor other than the traditional Bourbon or sherry casks is not all that uncommon these days – with pretty much every wine varietal under the sun now having its casks purloined by both Scotch Whisky and Irish Whiskey distillers, and more recently rum and beer casks being used.

I’m not normally a big Jameson fan (except in Irish coffee, for which there is no better whiskey available IMO), but with this stout edition of their new Caskmates line they have well and truly out done themselves – from a brand that I’m not normally too eager to drink has come a whisky that is probably my third favourite Irish whiskey that I have yet tried; after the Bushmills 21yo, and the Redbreast 15yo.

This whiskey is extremely easy to down – and I mean extremely easy; pouring it over ice makes it almost smooth enough to drink by the pint – which could be rather dangerous on a rough night!  🙂

I do have a confession to make with the Jameson Caskmates Stout Edition: I have been through several bottles (with the help of several friends) in a record time for me, also rather unusually for me: when it was on a decent special recently – I bought half a dozen bottles.  I don’t usually comment on the value of a whiskey as prices vary so much from country to country, but for the quality of this whiskey compared to the prices that I have seen for it in several countries it is a smashing buy.

Nose:  Fresh cut grass, winter fruits, lemon peel, a few almonds, and a dusting of cocoa.  A smattering of standard pot still spices are also present Palate:  Sweet typical pot still flavours of honeyed spices, sweet sticky malt with a dash of burnt golden syrup, a small layering of winter fruits, dark chocolate Tim Tams, and the weakest pinch of hickory smoked salt. There's also some dark, but sweet, hops flavours - a rather unusual taste in a whisky. Mouthfeel:  Thick, dry, and oily in equal measures that complement each other rather than fight each other.  A slight burn down…
Jameson: Caskmates – Stout Edition
Jameson: Caskmates – Stout Edition
The Whisky Ninja